I emailed an old friend, Woodsy, from primary school days who I hadn’t seen for well over fifty years to ask him if he was interested in a week of walking , during a four week holiday I had planned in England.

It was mainly our nicknames that we had in common. Mine was Leafy.

It’s easy to make new friends on the track, so I figured two old mates should get along just fine.

The main purpose of my trip « back home », was to visit my ninety three year old Mum. She’s pretty fit and in jest I suggested she join me for a week of hiking in the wild north of England in early Spring. Winter snow, a reminder of the beast from the east, was still sitting on the higher ground.

My Mum had the perfect response,

« Why don’t you go with somebody young and sprightly like yourself John, …someone in their mid sixties like you? »

Woodsy, he’s the tall one in the photos, said, « yes ». He’d grown a lot since he was eleven years old! And yet he still looked the same, just with a few wrinkles, like me! We obviously still had a lot in common.

I’d suggested that maybe we could tackle Wainwright’s Coast to Coast. A serious overestimation of my ability.

Fortunately he picked the much shorter Hadrian’s Wall path.

I’d never been to Northumberland, so it was an adventure.

Here are a few photos. I’ll post more later and let you know how two old geezers got on after such a long gap on the ‘friend timeline’. 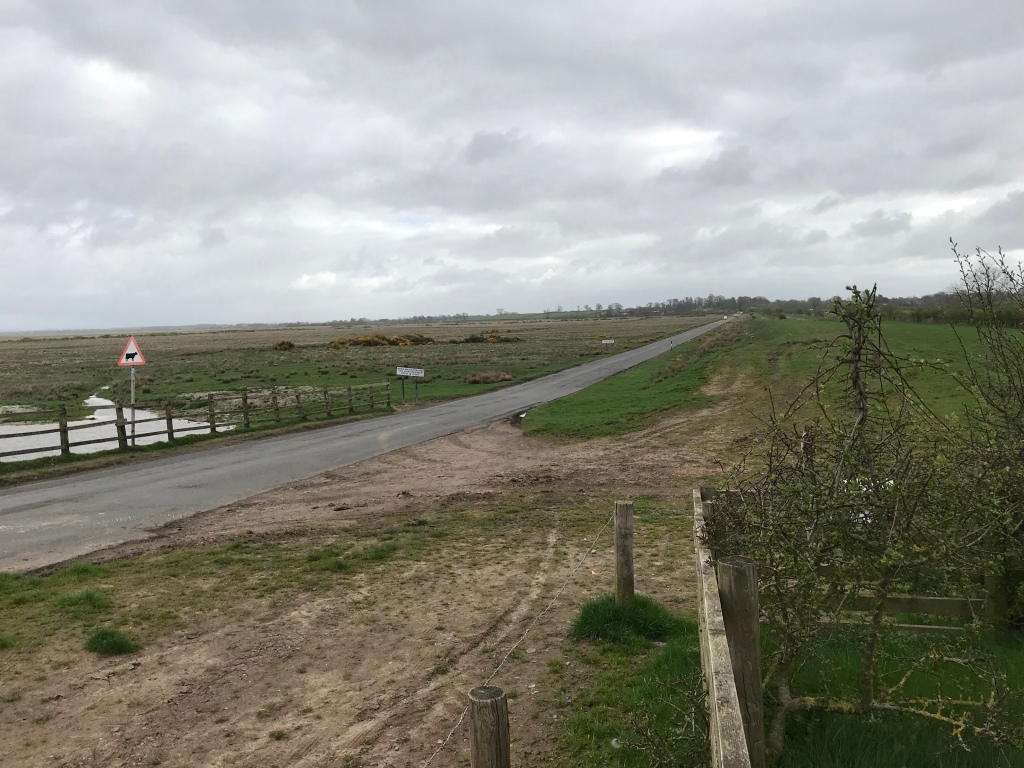 For a small island Tasmania is blessed with more than its fair share of natural beauty, challenging walks and climbs, and easy access to tranquility and isolation.

Just over an hour’s drive from Hobart is the Mt Field National Park. In winter there is enough snow for skiers and snowboarders to use the established ski slope or head off into the higher ranges and discover their own adventure.

This circuit walk takes in some fabulous wilderness scenery. There was still some snow around in early Summer to add a bit of extra fun.

We met just one other couple during our eight hour hike. They were tackling a shorter circuit, which seemed like an attractive option to me after the climb up to the shelf. But my daughter had the day planned!!

This hike was my most challenging full day endurance test in preparation before heading off on the Overland Track. I needed a long soak in the bath when I got home. 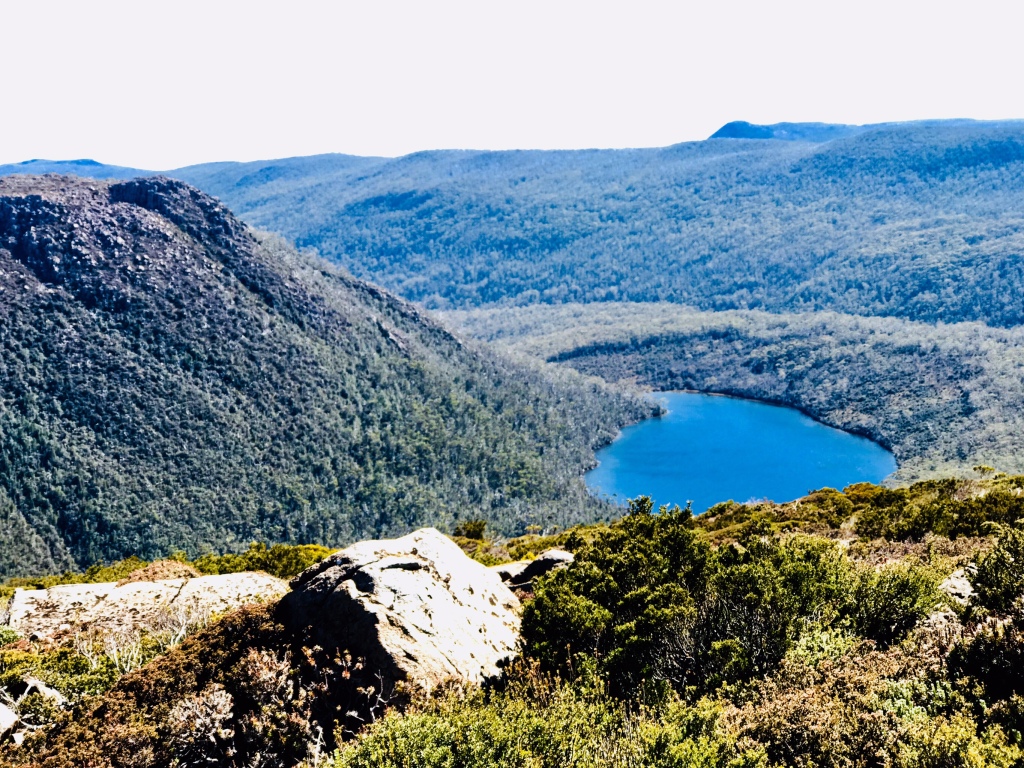 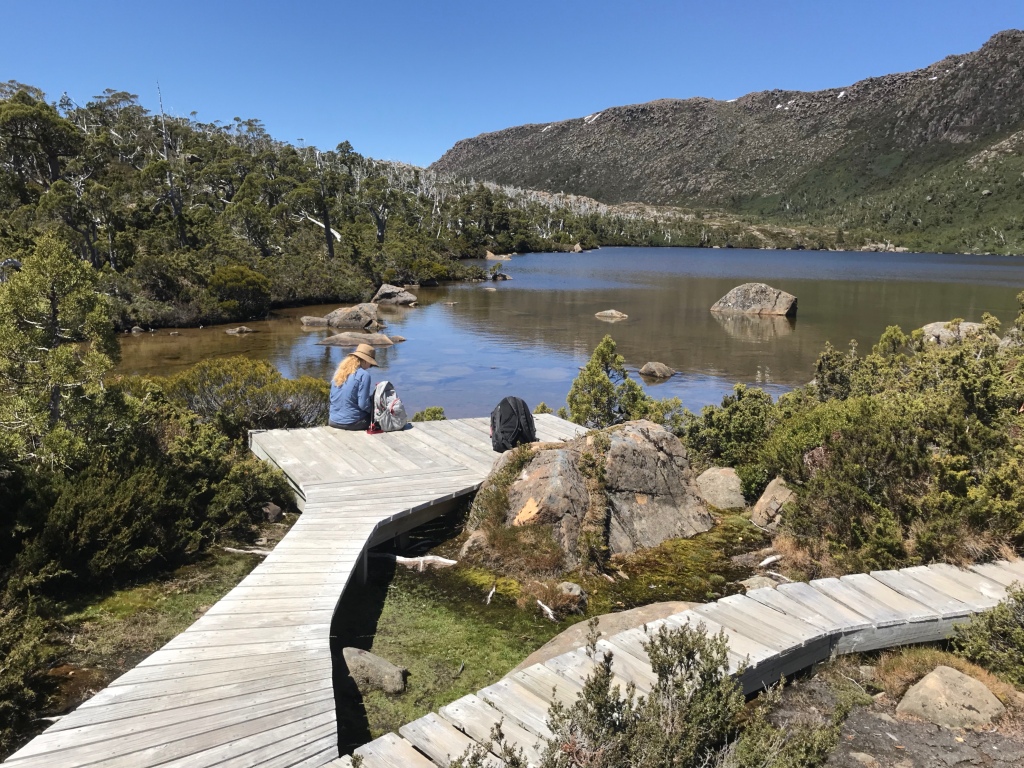 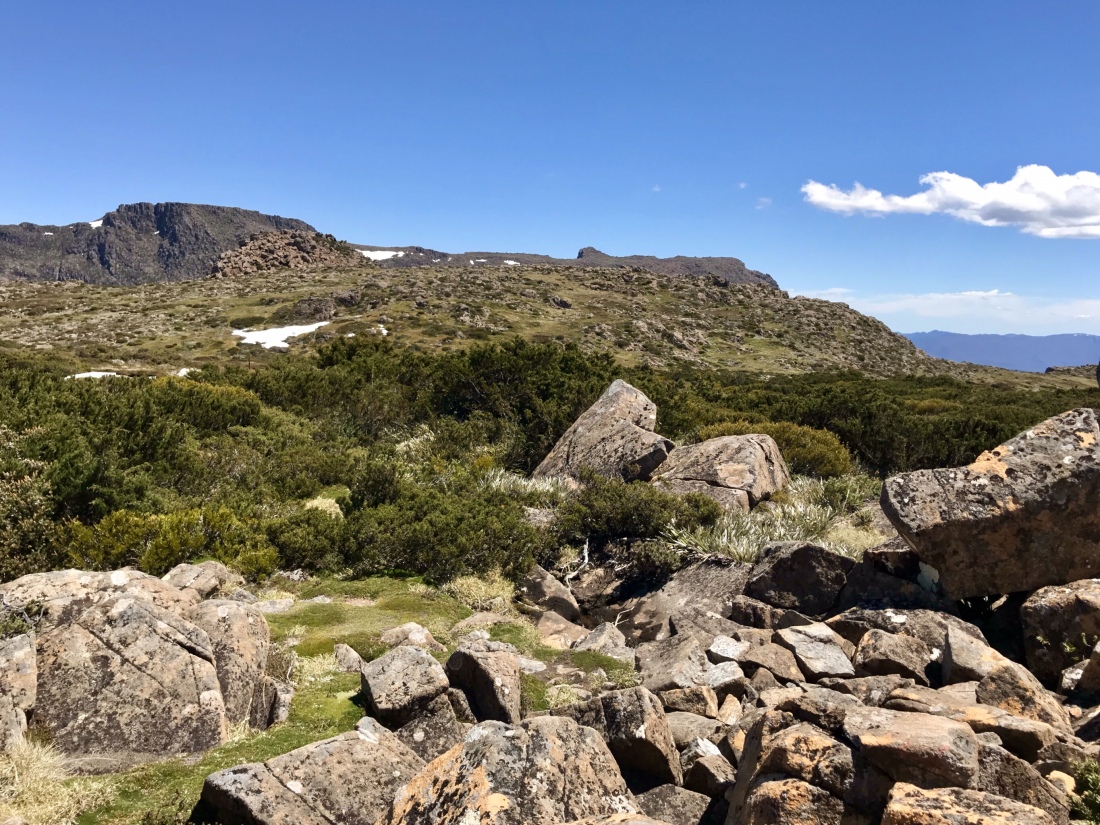 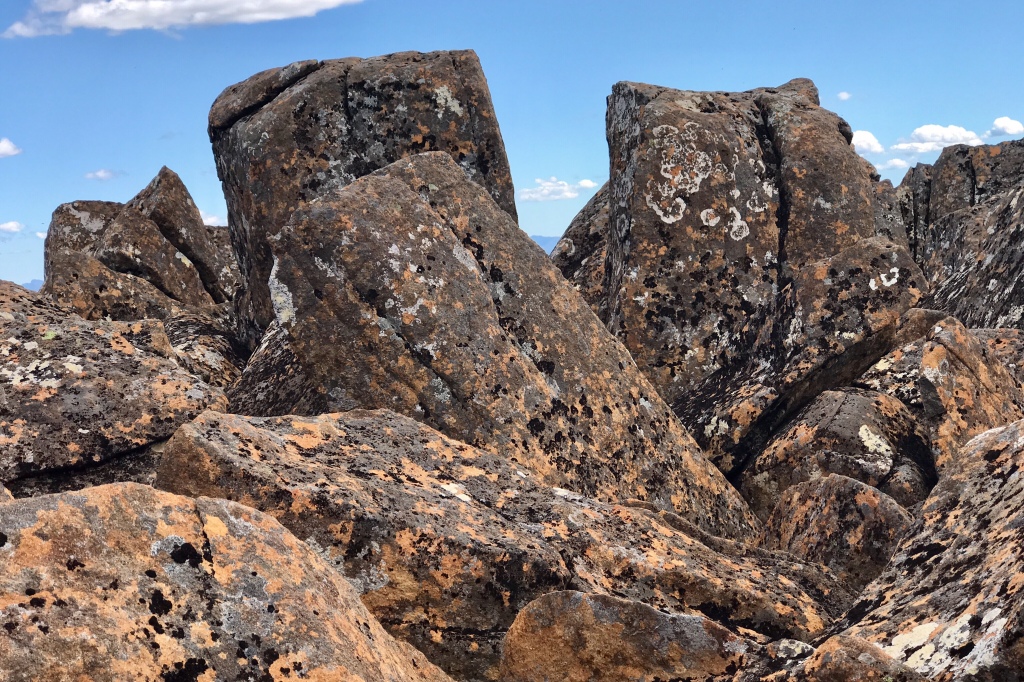 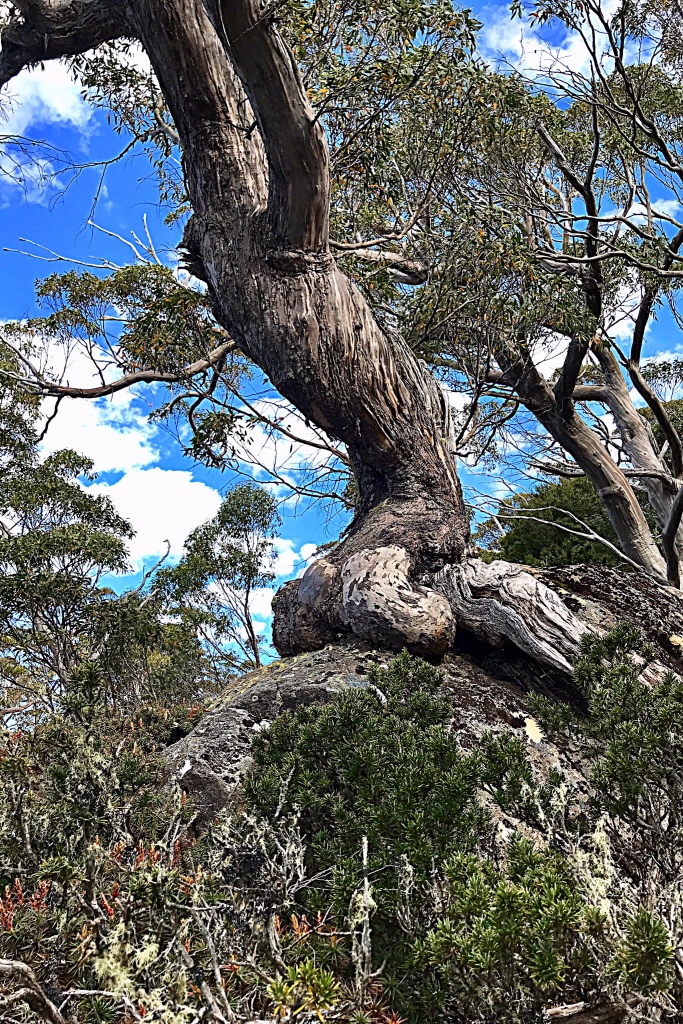 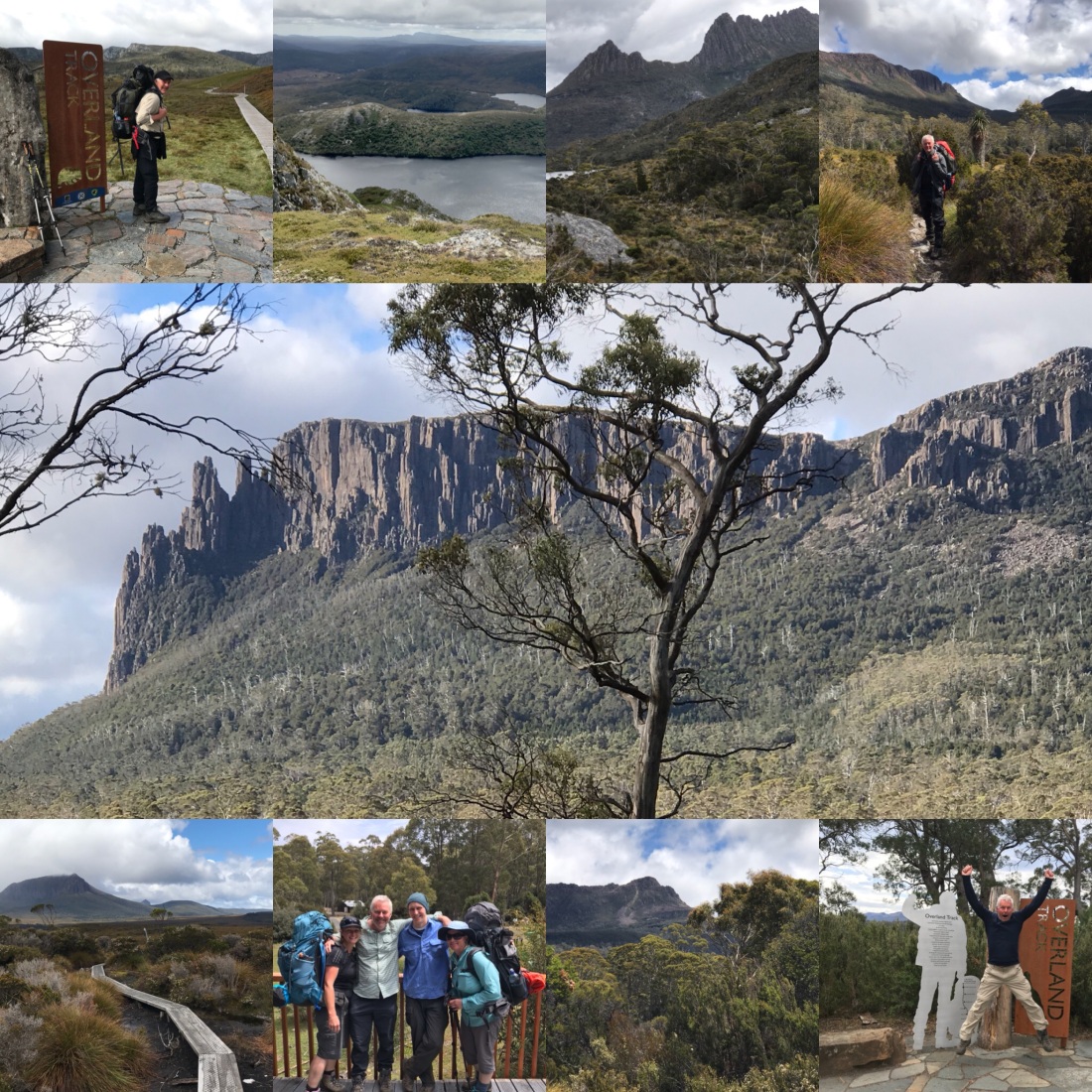 Memories from the Overland Track, December 2017.

My most demanding and relentless climb with a pack on so far. Phew!

Hardy souls choose a full day up and down, (6 hours if you’re fit). But it is a crying shame to rush up and down through this beautiful scenery, if you have a night and extra day up your sleeve.

My daughter and I did it with an overnight stay; there’s a few camping spots and a rough hewn stone hut (almost derelict but charming). The sunset is an amazing experience.

The photos speak for themselves. 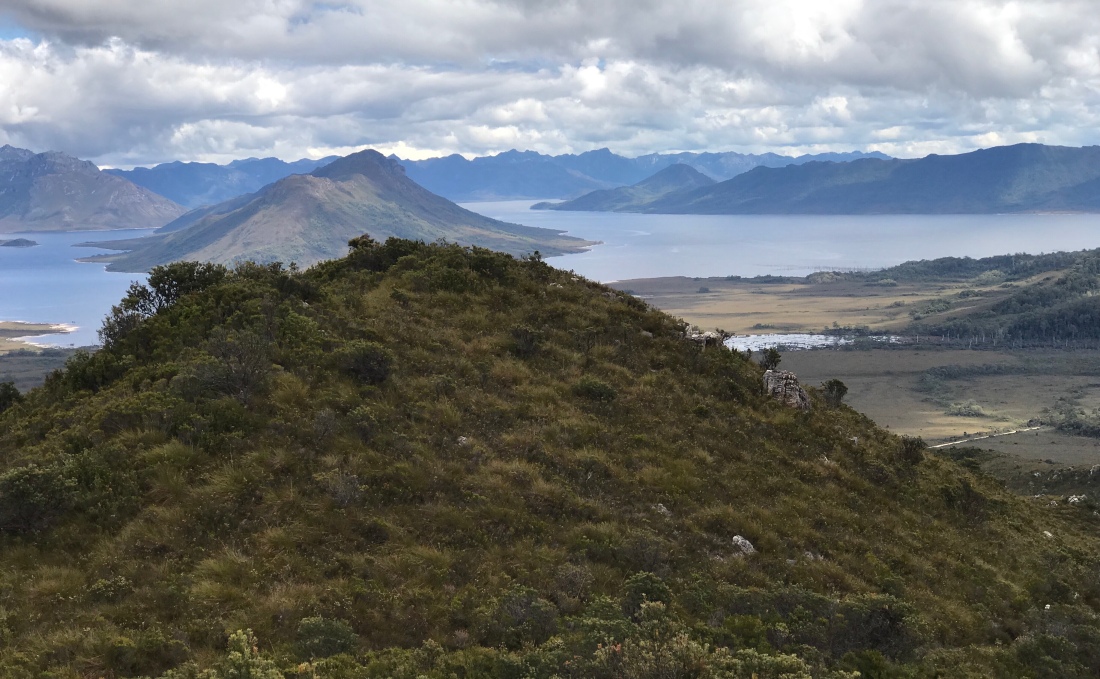 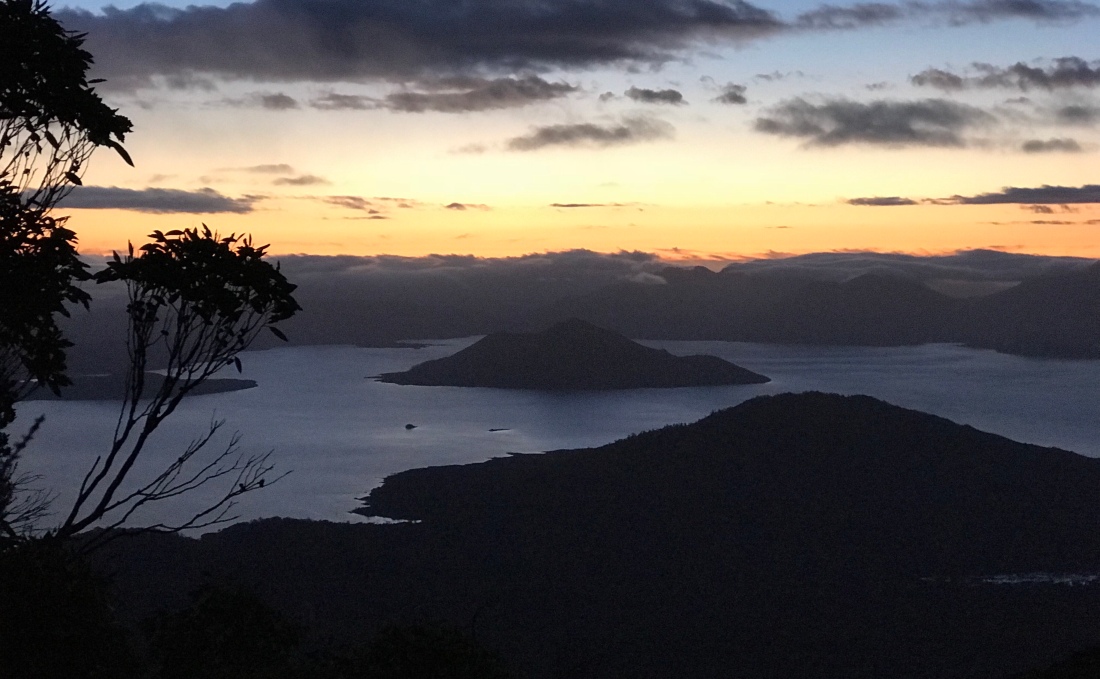 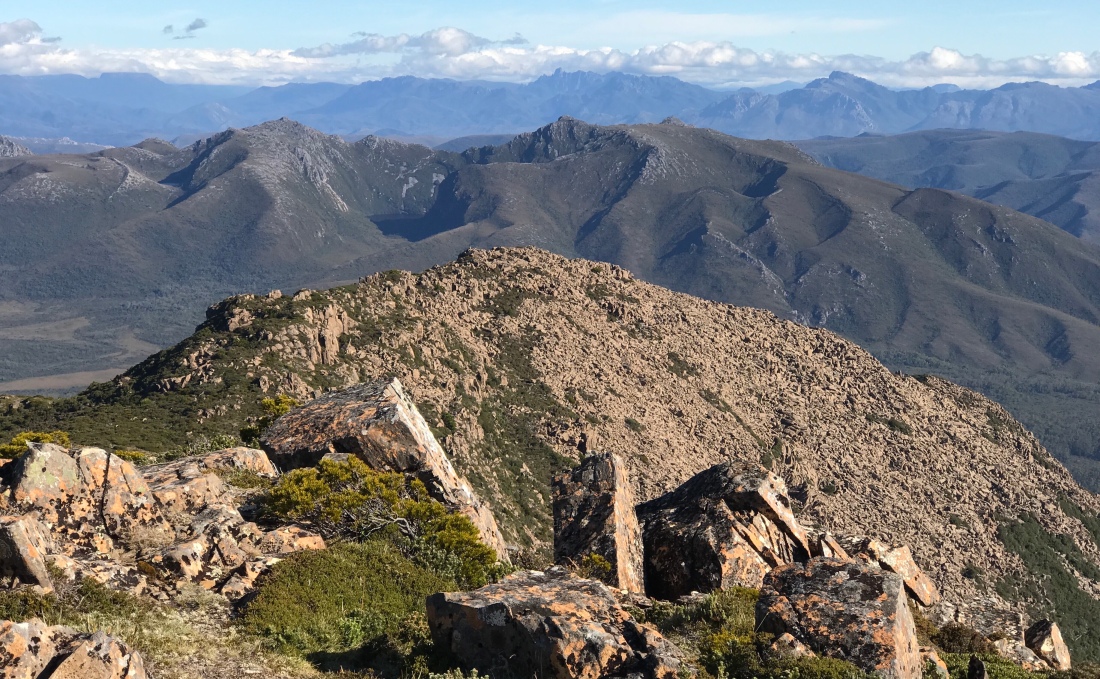 This is a memory of my first overnight hike in almost 50 years, with my daughter and son in March 2017. I’m heading back to do it again as soon as the Spring days start to lengthen. The hike up and down Mt Graham is a bit of a slog with a back pack to carry, but the views are simply splendid and demand frequent breaks for photos along the way. At least that’s my excuse for frequent rest and recuperation.

My two legs are older than my son and daughters four legs combined. 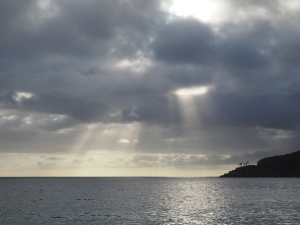 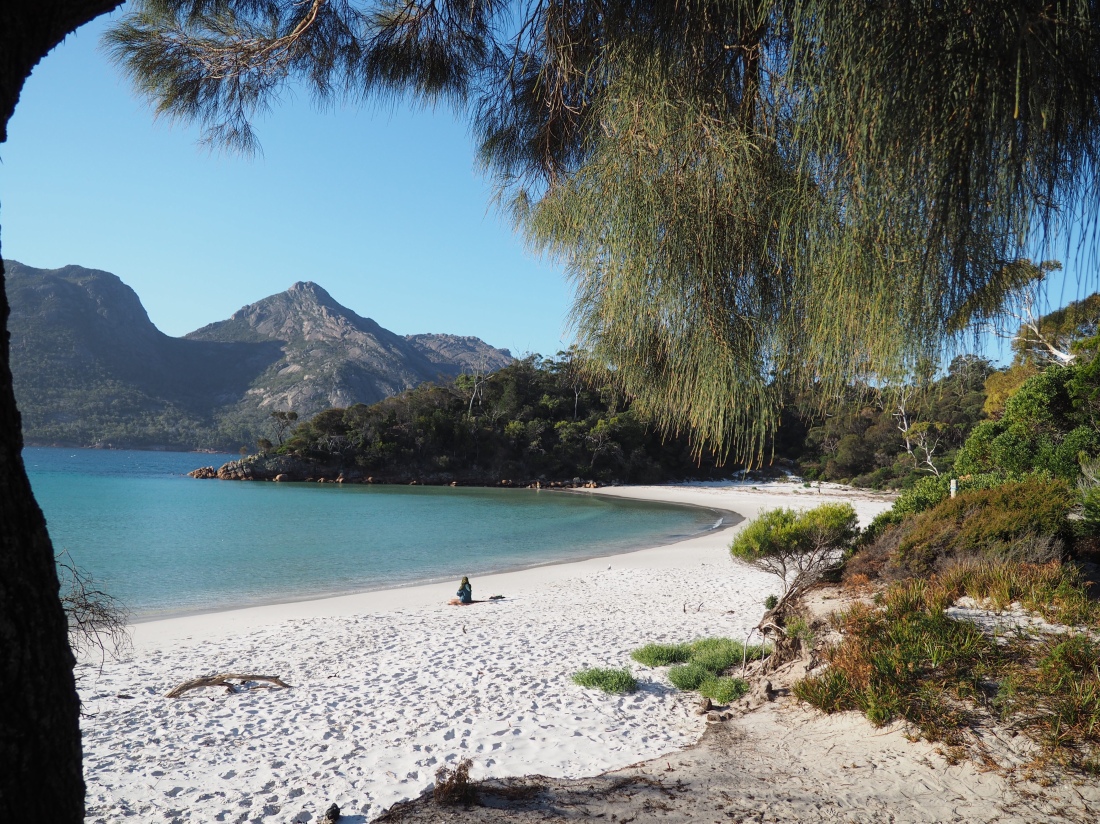 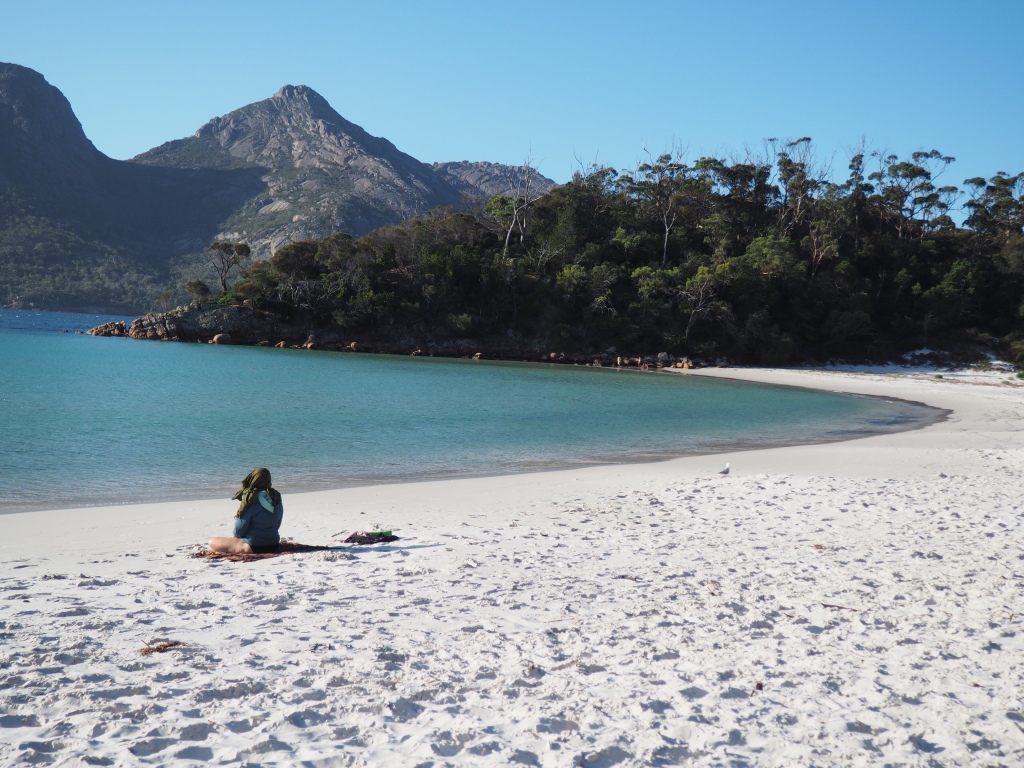 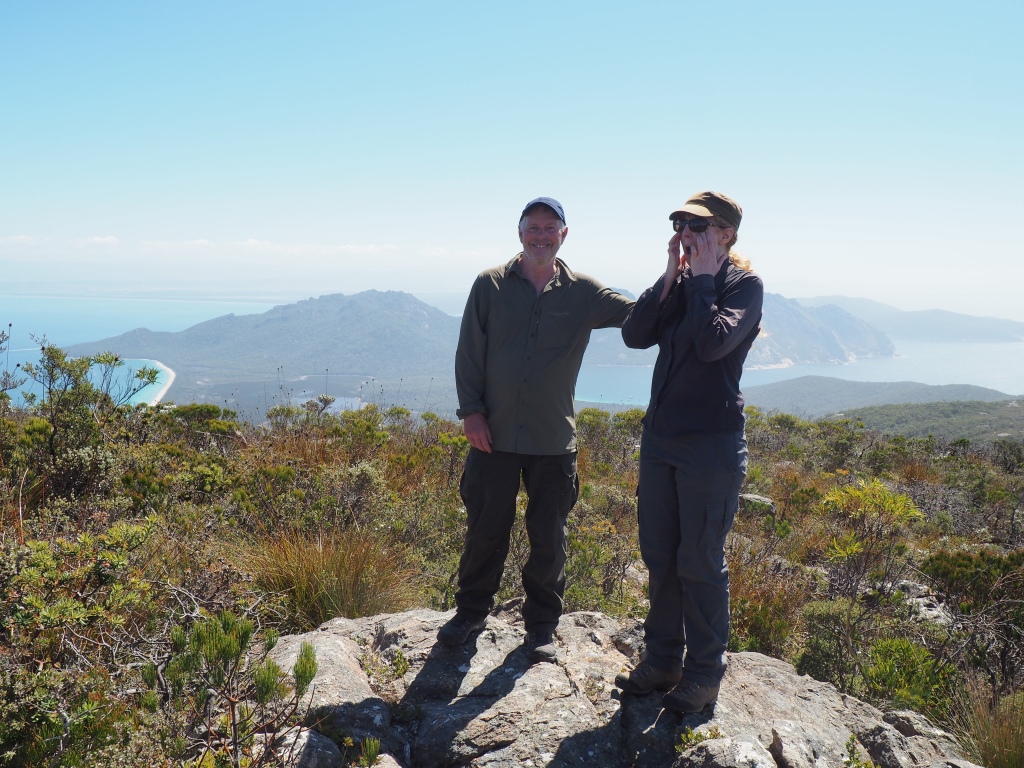 Starting at the Springs along Milles Track, it’s deceptively easy going, until the rock and boulder hopping begins. There are several panoramic views across the Derwent River. The rocky but well maintained track through lovely forest and heath, soon reaches the Potato Field, a stretch of endless wet and unstable rocks back up to the tree line. I managed to restrict myself to just two stumbles, and collected a few more minor grazes and bruises.

I was hiking on my own, I might go with a friend next time, it would be easy to badly sprain an ankle, and it’s not the most popular track.

Superb views to Cathedral Rock appeared at the half way point, first in sunlight, and then through approaching cloud and some light drizzle.

Then it’s all downhill, following a quite muddy and very slippery track to the wonderful Wellington Falls. The weather turned quickly, so my banana and almonds snack was over quickly. I was planning to descend through the unofficial rough and risky track to the base of the falls, but the ominous clouds, sleety wind, and my bruised knee said. « No, another time, leave something to come back for ».

The sign said it was a four hour walk back to the Springs. I’m not a fast walker, but with a few photo stops, including early Spring parrots, I was back at the start in 3 hours. 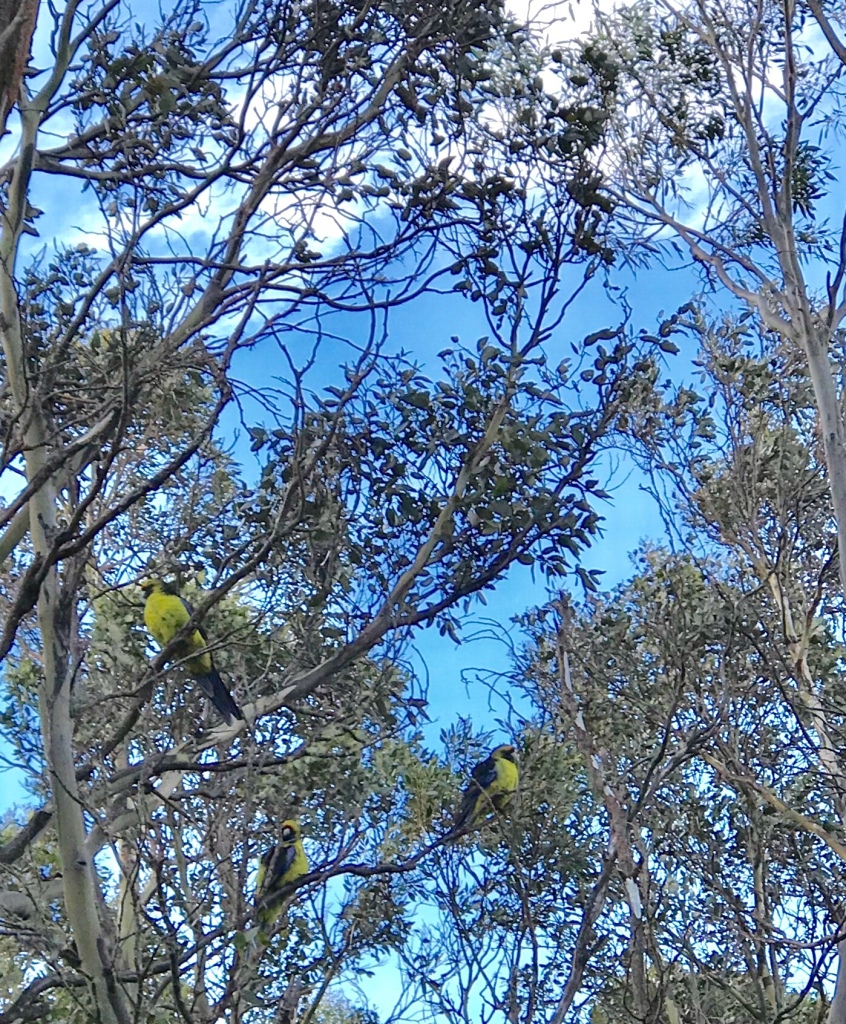 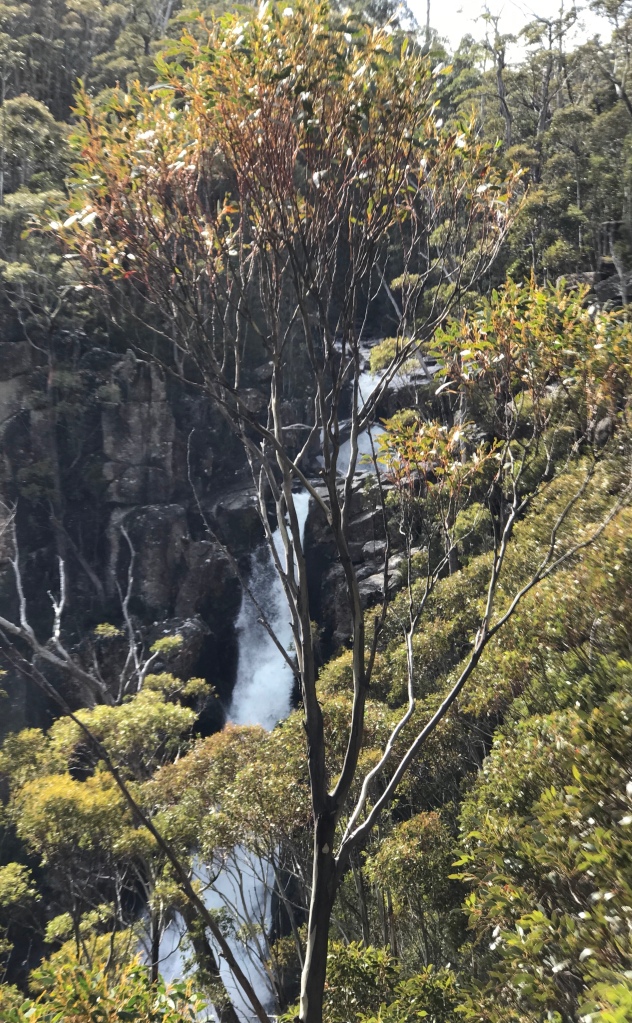 This Tasmanian wonderland is a half-day side trip through the magical Pine Valley. If you are planning on hiking the Overland Track, I’d recommend including at least one night at Pine Valley hut. This was the highlight, among so many, on my Overland walk. 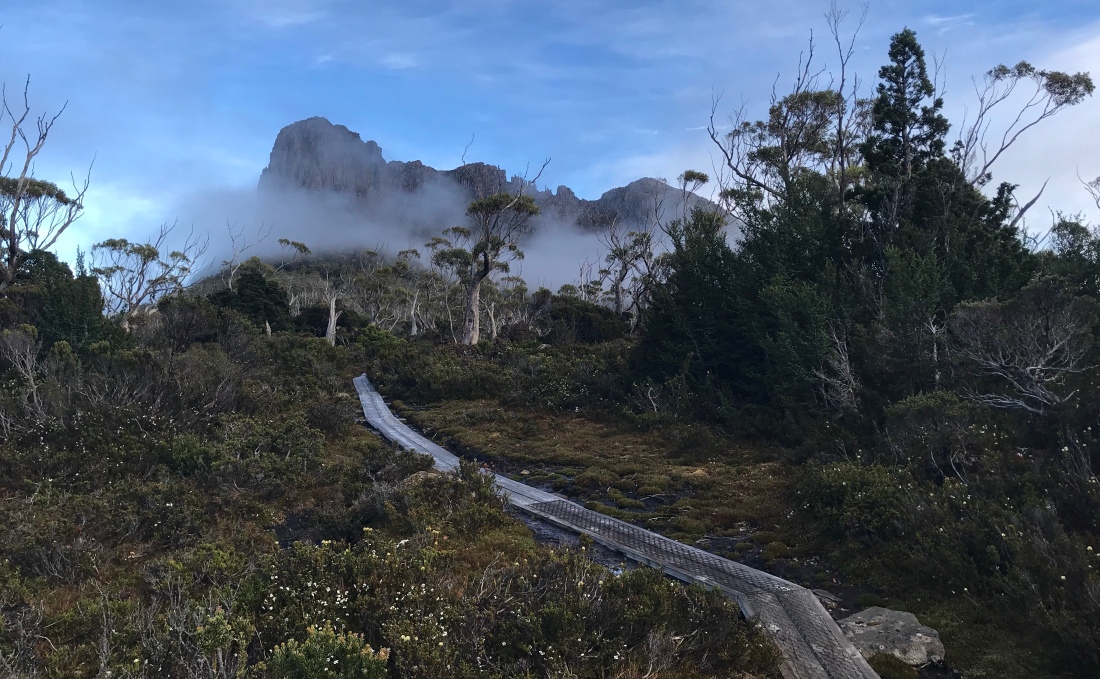 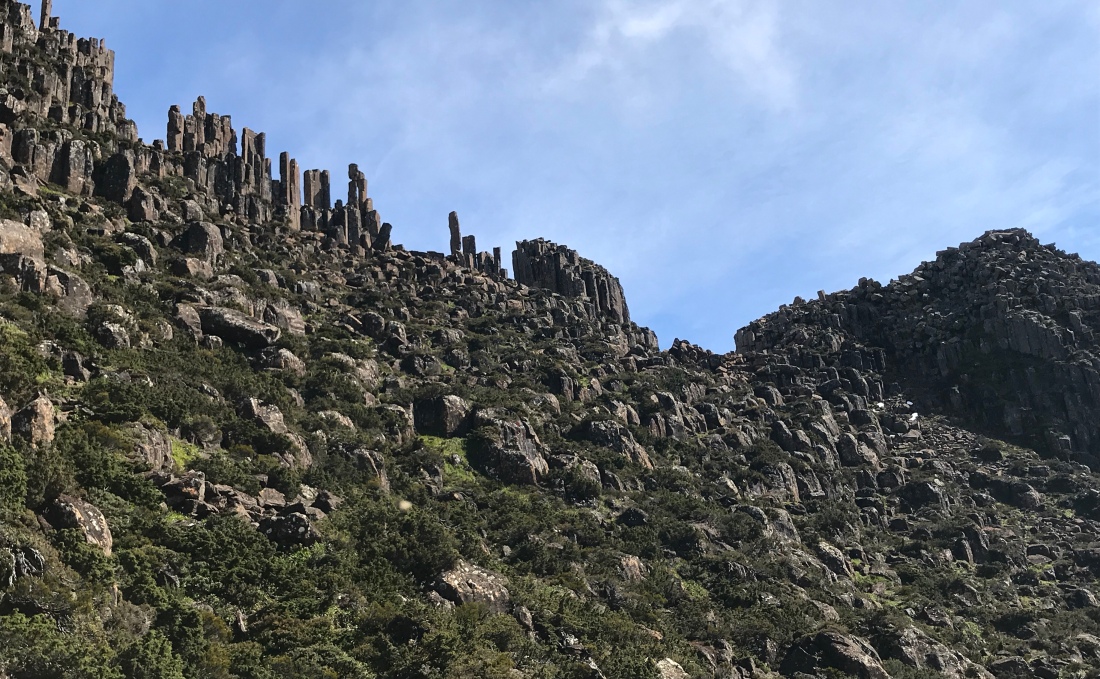 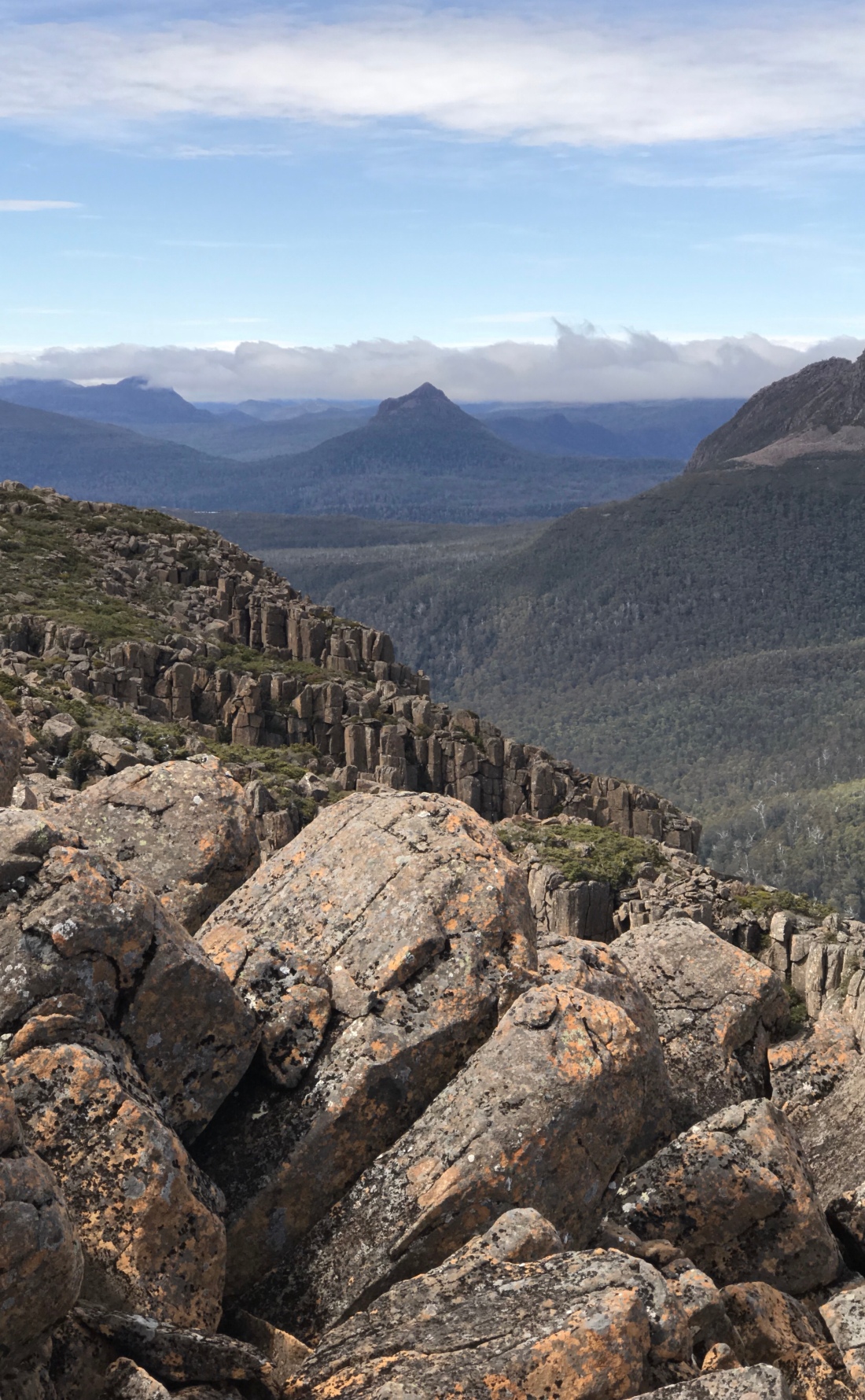